So today I'll introduce you to the Flora Yokohama sharehouse which is just a short train trip from Yokohama Station. Planning a move to Yokohama soon? Just curious what it's actually like to live in a sharehouse? Read on and learn all about my new home! A typhoon is slamming the city today, so I'm inside and I've got nothing but time. 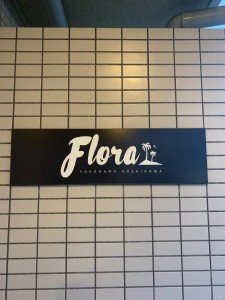 First off, the building itself. I did a lot of research on different sharehouses in the area before I chose Flora Yokohama, and the main reason I chose to live here is that the building is just so dang nice. The building itself is fairly new, so no worries about structural issues such as squeaky windows, rattly air conditioners, drafts, water damage, or any of that ish. The social spaces are kept impeccably clean by an Oakhouse staffmember who swings by almost every day. Speaking of social spaces, there is a large kitchen and attached living room with two long tables to eat at plus a TV. There's a laundry room, shower/bathtub room, and my personal favorite, a home theater room with a projector tv screen! But the most important and best part of the house to me is the bedrooms themselves. 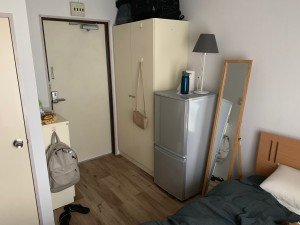 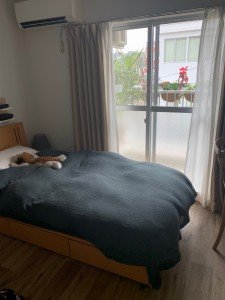 The rooms are all private and quite large compared to what you'll find at a lot of sharehouses. One of the walls is painted either a cheery yellow or soothing blue, which adds a lot of personality and life. Most of the rooms (except for the three rooms on the first floor) come with a pretty big balcony that lets in a ton of light and is nice to hang laundry/keep plants. The room comes fully furnished (thank god!) with a very large minifridge with separate freezer drawer, a full length standing mirror, a large built-in dresser and shoebox, a full-size desk, Japanese "single" size bed and mattress, and of course the real gems: a separate "bathroom" with a personal toilet, and a sink. Let me tell you, after living in American college dorms for the last four years having my own sink and toilet is amazing. 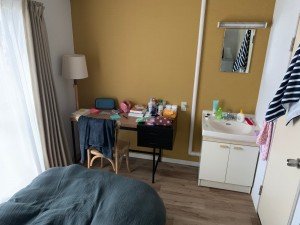 I was worried when I moved in about the shower situation, because there are two showers and two bathtubs for a house of around 35 people. But by some weird voodoo magic I don't understand it hasn't been a problem at all. There's rarely anyone else in the shower room at the same time as me, and I've never had to wait to take a shower. Granted, I get to leave the house at 9am for my school schedule so I probably am getting ready a bit later than many other people. But it's still wild, and the showers are really nice. They each are inside a separate changing room that locks and has a basket to hold your towels, shower caddy, etc, and the water pressure/hot water is a dream. So, my one big worry was alleviated and I'm super happy with my sharehouse choice!

Next week I'll take you guys on a tour of the kitchen as I embark on the adventure of baking cookies in a Japanese kitchen.