It's been awhile I haven't posted, so I must begin with a sincere apology for my sheer lack of dedication. As I am a strong believer that new resolutions are not only for New Years, I am resolving to give this blogging thing a new go! I am a bit of a perfectionist, and my desire to make posts so beautifully written with wit and deep meaning ends up being a bit of an obstacle to my actually producing.... well, anything. As my wise yet cynical co-worker, who is a part-time author and blogger herself, says, "Don't let the perfect be the enemy of the good." In other words, it's better to be consistent and good, than inconsistent and perfect. But I digress...

This month of November saw the Nakano Village sharehouse numbers drop as two of our dear share mates returned to their respective countries. One of them returned to his hometown in India after being with us for seven months. I am sure he was quite happy to be reunited with his wife and children. It must be so hard to be away from your own family for such a long time, but I will admit that I will miss the delicious smell of his authentic Indian cooking which would fill our kitchen with wonderful aromas of spices not even available here. He always had such fascinating cultural differences to tell us about. India is such a completely different country, from both Japan and Canada.

The second person to go back home was a younger gentleman, whose stint in Japan was under the pretext of a unique journalism internship. He had finished university not so long before, so I could imagine it must have been an exciting opportunity for him. He was quite young, yet very knowledgeable about many things. I suppose you could call him an old soul. He is from England, but his family history has some Japanese lineage. He studied Japanese in university, so he was rather fluent as well! He always added a nice balance to any gatherings we would have in our kitchen with his calm laid back demeanor and his insightful yet ironic statements. alas, a complication in his visa caused him to have to return home far sooner than expected. He did leave us some awesome little treats in the kitchen though. (see the picture below)

It happens rather naturally and without expectation, but you grow rather fond of these people you share your life with. This world is so full of interesting people and living in a share house is such a unique way of seeing and experiencing it. Because the people that live in share houses in Tokyo tend to be mostly non-Japanese foreign nationals, it creates such a unique international environment that is quite nostalgic of being home in Canada (for me obviously).

If you are interested to come to our share house, I put a link above! I heard one of the two spots was already taken, and I am quite looking forward to seeing who the new person is. As far as I know, though, the other room is still available!

Thanks for reading! Next week, I will talk about the awesome fall BBQ we had a couple of weeks ago! 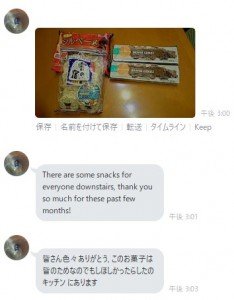 The only good side to watching your share mate move out.

I am a mid thirty year old guy from Montreal, Canada currently working as an ALT in the JET programme at a private high school in Tokyo. I have been living in Oakhouse Nakano Village since October 2018, and I plan to stay here until August 2020, when I finally move back to Canada.