Today is April the 9th, 2020. It marks the second day of a one month holiday that my company has granted to all staff as a precaution against spreading the deadly Corona virus. Usually when one thinks of a holiday, especially a long one, one imagines trips overseas, beaches, relaxation, friends, family, strange food, one thousand photos, enjoyment, excitement and so on. As the daily number of infected cases being reported is rising quickly, the situation seems more daunting than expected and the only way to protect yourself and others is to self-impose a quarantine at home. My one month holiday will be a housebound one. The government has not imposed any strict laws, it cannot, but has instead 'suggested' and 'strongly recommended' that citizens only venture out of their homes for necessities. Many people and companies have taken matters into their own hands and are trying to implement whatever measures they can to stay safe. At Oakhouse Ichigao West, it is no different. There are signs posted in two mains areas advising on conduct and practices to safeguard all residents. 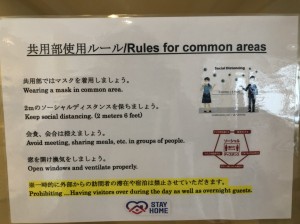 Before the Corona virus was literally a threat on our bedroom doorstep, some residents had also experienced some dangerous accidents when they were going about their daily chores and tasks at the house. Those could have proved fatal but did not. On our house group chat one day, a message came through asking about the closest hospital to the house. While preparing a meal and using the pressure cooker pot, a resident had been in the unfortunate situation where the steam from the pot had forcefully escaped from the utensil and had burnt her face. Thankfully, it was a first degree burn and within a few weeks the damaged skin sloughed off and her face went back to its flawless beauty. Another case of a first degree burn occurred when a housemate had been making a cup of tea. The boiling water from the kettle had somehow tipped onto her foot, scalding the skin on her bridge and ankle. Sometime last year an ambulance was called to the house after someone experienced a dizzy spell and it seemed as if they needed medical attention. 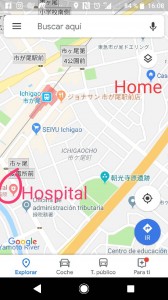 Luckily, in all of these incidents a random housemate was around at the time and could render immediate assistance. Even though the sharehouse is probably more dangerous than isolating oneself in a private space, there is still the silver lining that someone is always there to help.

Suffice it to say, for the rest of April, cabin fever is the next challenge. There is some hope though as the weather is quickly altering and taking a long walk along low-traffic streets and the river, even to the supermarket for essential goods might provide an effective change of scenery and some exercise.