There are two ways that you can look at a lockdown - in a positive light or a negative light. So far I have regarded a month off work as a blessing; the gift of time. What have I been doing? Studying Japanese mostly and trying to work on some personal projects. I have tried to maintain a regular routine so that when the glorious holiday that I am on is over I will not struggle with the demands of daily life. It has mostly worked except for the fact that so many people are at home that it is hard to be productive when people are hanging out and having a good time. This condition known as 'fomo' is a constant distraction.

There are many house mates who are taking the situation very seriously and consider socialising a complete no-no. Others, like myself, think that self-quarantining or being asked to stay in your room as much as possible is not only stressful but also pretty useless. I say useless because let's be real, in a house where everything is shared - especially in the kitchen and toilets which are essential for hygiene and health - it will be impossible to avoid getting or spreading an infection. Not being allowed to visit friends or even head out for some shopping or dinner parties is stifling, so this socialising energy needs to be channelled through a safe outlet. As human beings we need to be with others. If we are all confined to the same space, what better place to build relationships and interact than in here?

In Japan, hikikomori (literal meaning "pulling inward, being confined" that is "acute social withdrawal") are reclusive adolescents or adults who withdraw from society and seek extreme degrees of isolation and confinement. Hikikomori refers to both the phenomenon in general and the recluses themselves. Hikikomori have been described as loners or "modern-day hermits". Estimates suggest that half a million Japanese youths as well as more than half a million middle-aged individuals have become social recluses. I think it is very easy to slip into this state (speaking from experience) and I have no desire to become an official hikikomori.

The thing I would say I miss the most is being able to head out for some good, spicy chicken. One of my favourite places (but only for the food) is Shinokubo also known as Korea town. The Korean food there is amazing and because I love strongly flavoured dishes, heading out there once a month with friends to get my 'fix' used to be something that I greatly looked forward to. I admit, I have gotten carried away sometimes and ordered dishes that were way too spicy (lesson learnt). I miss that too! At least we are able to go to the supermarket and take walks around the area. Without being able to go outdoors I surely would have lost some of my mind by now. 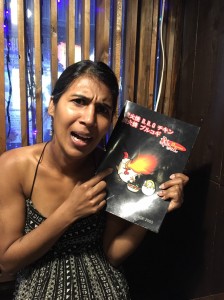