Shrines and Temples of Nikko

After a few quick snapshots of some desolate buildings that were the first sign that we were on the way to the main shrines and temples, we leisurely strolled along the stone paved walkways. We were greeted by the ominous stare of a peacock-sized bronze dragon, weathered but still eye-catching because of its design and realistic appearance. He sat atop a fountain and guarded the water that seemed to be rising to fill his greedy mouth. Moving past him we stopped for a bathroom break and to refresh ourselves at the visitor's centre next to the Rinnō-ji Temple. This is a Tendai Buddhist temple building. 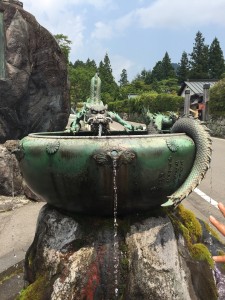 The site was established in the year 766 by the Buddhist monk, Shōdō Shōnin (735–817). Due to its geographic isolation, deep in the mountains of Japan, the site soon attracted other Buddhist monks in search of solitude, and it still is considered an important base for ascetic training among Tendai monks. Together with Nikkō Tōshō-gū and Futarasan Shrine, it forms the Shrines and Temples of Nikkō UNESCO World Heritage Site.

We skirted the building and walked along with a group of tourists, all of us admiring the architecture and old works of art caught in a time trap. It was a hot day and the tent and seats in the yard housing the Gojunoto ( a five-story pagoda) was welcome. There was even a cold spray of water coming from hoses attached to the ceiling of the tent. We sat for a while taking photos and observing tourists like ourselves. In this area, most of the visitors converged to view one of the highlights of Nikko. We also realised that most people were driving while exploring and had parked on the next side of the shrines and temple area. This was the reason why when we walked from the town into the park no one was to be seen. 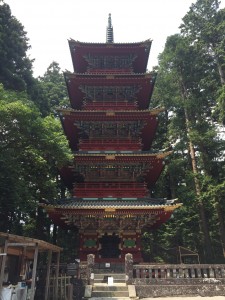 In Japan, Gojunoto means the temple of the five rooves. Each roof has its meaning. From the lower to the upper roof which means, land (foundation), water (the body), fire(the headdress that protect head), wind (pagoda finial) and space (jewel). These are the representations of the five worlds (five thoughts) and the vision of the universe based on the Buddhist thinking.

Having admired the pagoda standing before us, we then moved on to the Omotemon Gate. This is the first gate at Toshogu Shrine. It is also called Nio Gate because of the two guardian deity statues positioned on the left and right. Mon (literally gate) is a generic Japanese term for gate often used, either alone or as a suffix, in referring to the many gates used by Buddhist temples, Shinto shrines and traditional-style buildings and castles. Nikkō Tōshō-gū's Omote-mon (front gate) structurally is a hakkyakumon (eight-legged gate). It is called this because of its eight secondary pillars, which support four main pillars standing under the gate's ridge. It therefore really has twelve pillars altogether. 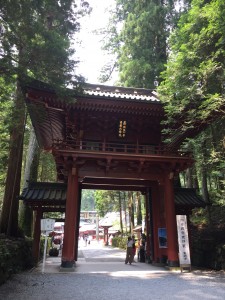 Guardians in the form of lions, rabbits, dragons were on display here and there. Beautiful flowers that looked like lilies (I am terrible when it comes to naming birds and flowers) draped the walls and made beautiful curtains with their vines and leaves. 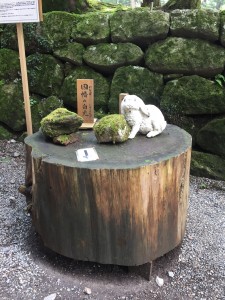 After looking around for a while and then making a trip to the souvenir shop we headed back into town for a bite to eat and to rest.