After lunch, we did the usual, started hunting for a toilet to relieve ourselves before we set out to locate another waterfall. As I walked away from the observation deck, I found a narrow and steep staircase that led to a small, almost deserted parking lot. There I found a beautiful showcase. It contained wooden carvings. The scene depicted a tiger and dragon locked in the angry embrace of battle. I was curious about the origin of this creation and after a lot of research I was able to get some insight from this website, 'https://www.buy-japan-art.com/collections/one-stroke-dragon-painting'. To make this blog easier for reading I have included the highlights of the writing which are interesting and informative. 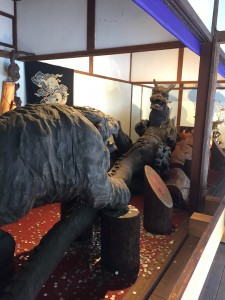 The Japanese dragon is a Japanese mythological creature with a serpentine shape. It embodies the force of nature. It is a symbol of natural phenomena. Eight king dragons reign on the Japanese archipelago : Nanda, Batsunanda, Shakara, Washukitsu, Tokushaka, Anabadatsuta, Manashi and Uhatsura. In Japan, dragon statues often border lakes, rivers and watercourses. The Japanese dragon is the protecting spirit of the place, to which offerings are made. It is good, hunts evil spirits and is the guardian angel of personal achievement. A few blogs ago, I mentioned that when we visited the Rinnō-ji Temple at the Shrines and Temples of Nikkō UNESCO World Heritage Site that there was a fierce looking guardian poised a top a fountain at the entrance.

It is common in Japan for many Japanese temples to have dragon images in the form of sculptures serving as fountains in the purification basins we find at the entrance of the temples. Through a determined series of gestures, the visitor literally washes his hands and figuratively his spirit with this water before entering the temple. At first, when I saw others doing it I was a bit intimidated as I did not want to offend anyone by doing the wrong thing and thus soiling the ritualistic cleansing that is considered sacred. However, as time went by, I was able to visit places with others who were knowledgeable about the proper steps to be taken at these cleansing fountains. The water is often cold and refreshing; the focus on scooping the water with a wooden or metal ladle and manipulating it to cleanse one's hands and mouth is meditative. There is a peaceful feeling to be realised if one often connects with one's spiritual nature.

The Japanese dragon is also celebrated in May. It symbolizes renewal. On that occasion, participants don a sparkling golden dragon outfit and this dragon image performs a graceful dance to a traditional music accompaniment. It is said that during the appearance of the god Kannon, the legendary Japanese dragon came down from the sky and that a one thousand pines forest appeared, symbolising abundant crops.