As with any other country, it is possible to experience history in the physical form. For Japan, it can be enjoyed through its museums, shrines, temples, castles, gardens, pagodas, parks and so on. In the eastern part of the world, things seem less solid and tangible and are instead more elusive and requires perception. From India to Indonesia, spirituality seems to be the dominant foundation in which history is steeped. For clarification on the definition of spirituality, we find this, "the quality of being concerned with the human spirit or soul as opposed to material or physical things".

Some cultures such as the Native American culture, also embrace a link with nature. Religion describes a division between the supernatural, which is ruled by one or multiple deities. Native American spirituality does not separate the two concepts in any real way. The spiritual or supernatural world is the same thing as the real world. Every supposed division is completely permeable and people can access everything spiritual just as easily as they can wade in a river or feel the sun on their skin. Animals also have an important role in their belief system. There are many sacred Native American animals. Native Americans believe humans were created to serve as caretakers of Mother Earth. This responsibility bestows insight that all living things are connected and each has a spirit, none lesser than any other. Nature is viewed as a benevolent friend and ally. This brotherhood with all things is reflected by the respect and reverence they give to animals, which are viewed as guardian spirits.

We have discovered previously that dragons are also considered to be guardians in the Japanese culture and mythology. Our focus in still on my trip to Nikko where this animal is a main feature. Why so in Nikko? Warning! History lesson ahead! This website aided in my research (https://www.buy-japan-art.com/collections/one-stroke-dragon-painting). 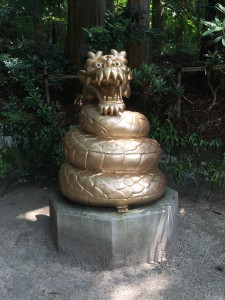 Nikko is considered to be the cradle of Japanese dragon art. The Japanese dragon images are a theme and a pattern found very often in the Japanese art and craft items made in Nikko. The reason is that it is in Nikko that the grave of an important character in the history of Japan, Tokugawa Iemitsu, is located. Tokugawa Iemitsu was born the year of the dragon in the Japanese horoscope. It is in specific thanks to him that the Yomeimon gate, now a national treasure and which marks the entrance of the Toshogu temple in Nikko, was built. This is in this temple that the grave of his grandfather, the famous Tokugawa Ieyasu is located. He is also an important figure in history. He is the one who unified Japan and is the founder of the Tokugawa Shogunate that ruled Japan from the Sekigahara battle in 1600 until the start of the Meiji era in 1968. For this reason, in Nikko, the second place of the most represented animal in sculptures and other decorations is taken by the dragon, making Japanese dragon art very popular in Nikko. The first place is taken by the tiger, which is the Tokugawa Ieyasu’s horoscope sign. Here I find the significance of the carving - a grandfather and his grandson immortalised through animals, wood and a creative mind. 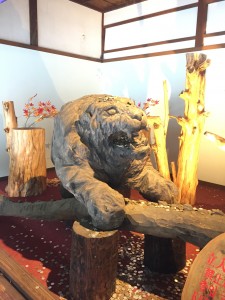