It’s time to escape the busy cities of Japan and to recover in a tropical and relaxed part of the country which is not that far away from Tokyo as you may think.
Kisami Ohama Beach is exactly what you need right now. I promise!

BUT! Be aware, you should get a Taxi for the last 10 minutes of your adventure, because the streets can be very bumpy and only made out of gravel and some cobblestones which may damage the wheels of your suitcase. You still want to know where you can enjoy the Japanese tropical feeling? Just follow the rest of the post and you’ll know where to spend your holidays in summer. 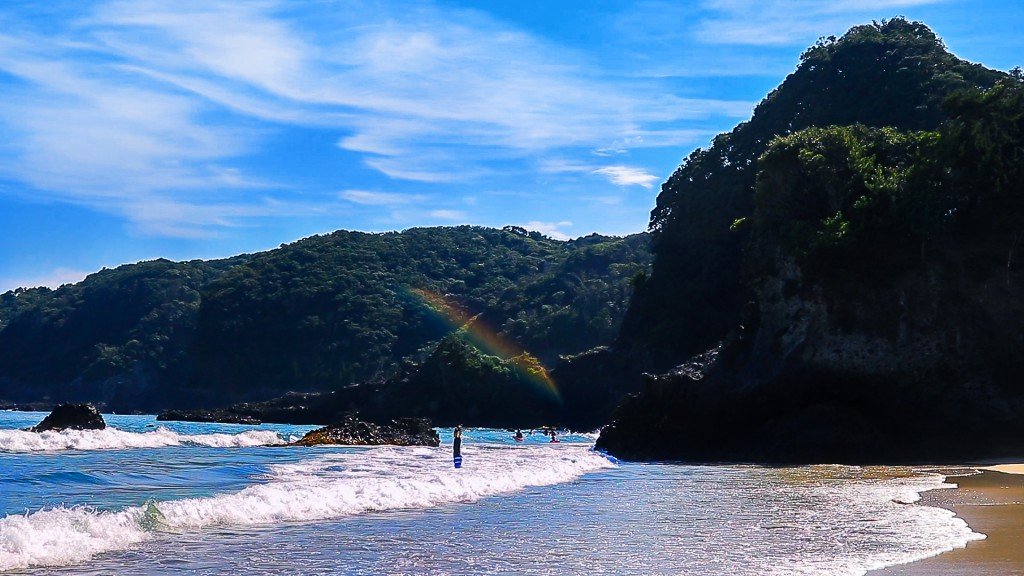 KISAMI OHAMA BEACH AND HOW TO GET THERE
You’ll find the beach in the Northwest of Tokyo. Depending on by car, regular train or Shinkansen the time of travel changes massively. A suggestion would be to get the JR Pass before you travel to Japan. With that you get access to different Bullettrains without paying anything. When you are staying in Tokyo and you are about to go to Shimoda, make sure you get a ticket first in one of the Service Stations. Specially to use the Shinkansen you often have to book a seat in advance before you can enter it.

After that you only have to go to the right platform and hop on the train. While you arrived in Ito, make sure to have some cash with you and get a train ticket to Shimodaeki. The bus stop is right next to the station. Both won’t cost a fortune and when you finally arrived at the Retreat Wabi-Sabi which is the next topic on the list, you know it was totally worth to do the trip. The final bus stop where you have to get out is called Kisami. In case you don’t mind a good walk you can go by food. Otherwise, you contact a taxi and it’ll bring you directly to your destination.

Don’t be afraid to call Wabi-Sabi for help to organize a one. Because sometimes it can be tricky to talk to Japanese! They are always friendly, but not everyone understands or speaks English. 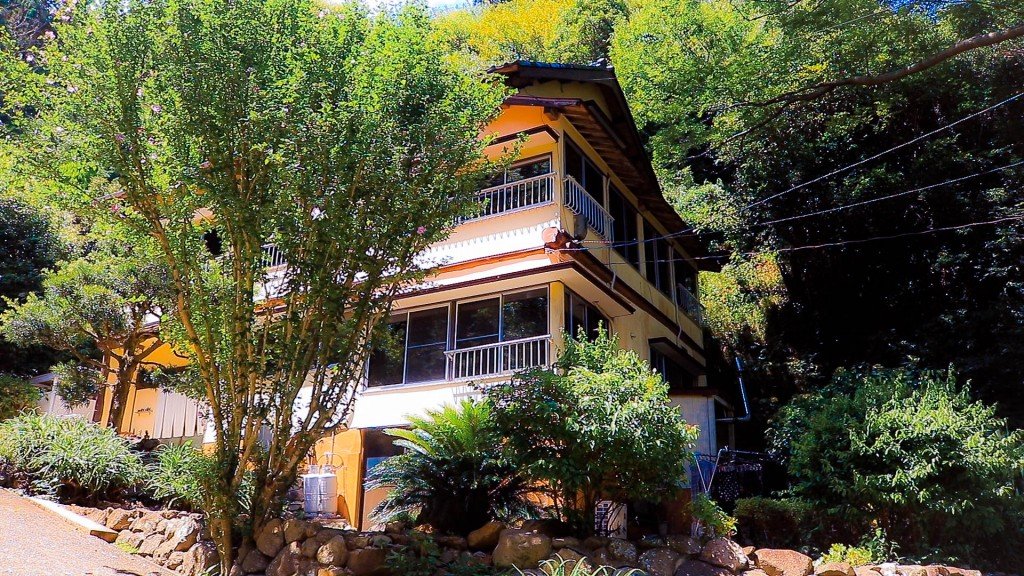 A day at the beach can be hilarious. You’ll see the lifeguard walking up and down, telling you where to swim, because of surfers catching the next wave and not to swim too far away. Often they are afraid and don’t know how to react properly. It may be the cause that a lot of Japanese can’t swim or pretty bad. Therefore, they have swimming rings or floaties, wearing big summer hats, sunglasses and taking selfies with their smartphones which are protected in a plastic case around their neck. The waves are not too high and it’s easy to get in and out the water. Still, you may have some sand in your bikini or shorts. After all it is a beach with water, sand, volcanic rocks and lots of greenery. Everywhere are little spots where you can hide and not getting distracted by other beach lovers.

WHERE TO STAY?
For me it’s clear and one of the easiest questions. I have been there once and would always go back. In Retreat Wabi-Sabi you’ll be welcomed by the owners Angela and Yasu. They are super friendly, always having a smile and help whenever they can. 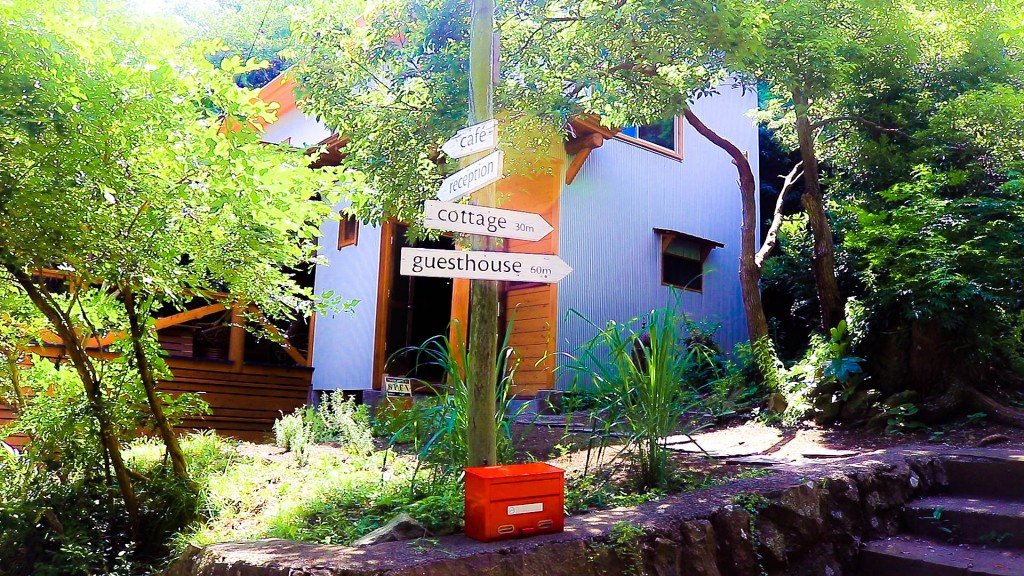 “Even with a screwdriver when one wheel of your suitcase was broken.”

The area where they are located is in the middle of nowhere and just the best place to regain energy. Next to it, you get the chance to experience a more traditional Japanese life. Such as sleeping on Futon, sitting on Tatami and enjoying a cup of tea next to a small table, taking an outdoor shower or a traditional Japanese bath. For the night you’ll get a pyjama which is different to the ones you know.

There are multiple smaller and bigger flats all over the area. The lounge where you enjoy your breakfast or lunch is next to the reception. They play light and cheerful music which fits perfectly to the noises of the crickets, birds and cicadas. I saw big butterflies with different shapes and colours.

Even a mantis joined me while I had cereals in the morning. I didn’t know they were that big and beautiful. I am sure she was looking at me while I was looking at her. Never have I ever imagined seeing one of these creatures in the wilderness, just showing up me slurping my fruity smoothie. 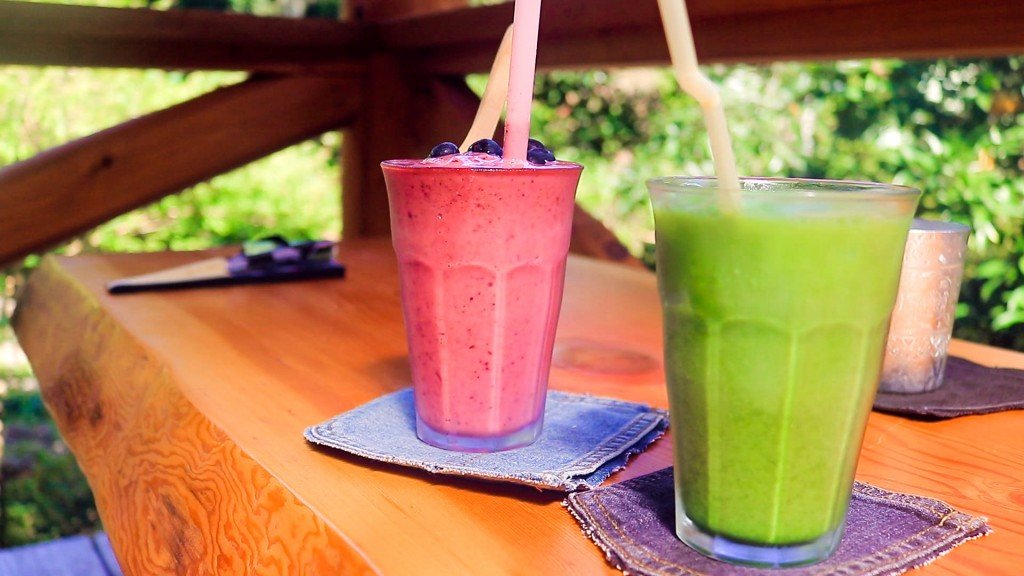 All dishes are freshly cooked, and they use herbs and fruits out of their garden. Everywhere are lemon and orange trees, just waiting to be picked. Depending on the season you’ll get a different menu and sometimes there are specials like friends of them are staying over and cook food from their own country. You are welcome to join and to enjoy a relaxed evening in a hammock.

Get ready for your refreshing adventure and relaxing moments in the evening. BOOK NOW! Retreat Wabi-Sabi is only five minutes away from the beach, you can ask for any advice like where to rent bikes, snorkelling devices, where to eat well and if there are some local festivals and life music around, equipment to surf and what to explore generally in the area.

BE AWARE OF CRABS IN THE SHOWER!
You heard right. Crabs in the outdoor shower and wild boars in the nearby forest which connects the Retreat with the beach. But don’t be afraid of both. The crabs are just walking around, and they are living all around Wabi-Sabi. Better than spiders, because they are just crawling on the ground and you won’t miss them, because they are fire red. 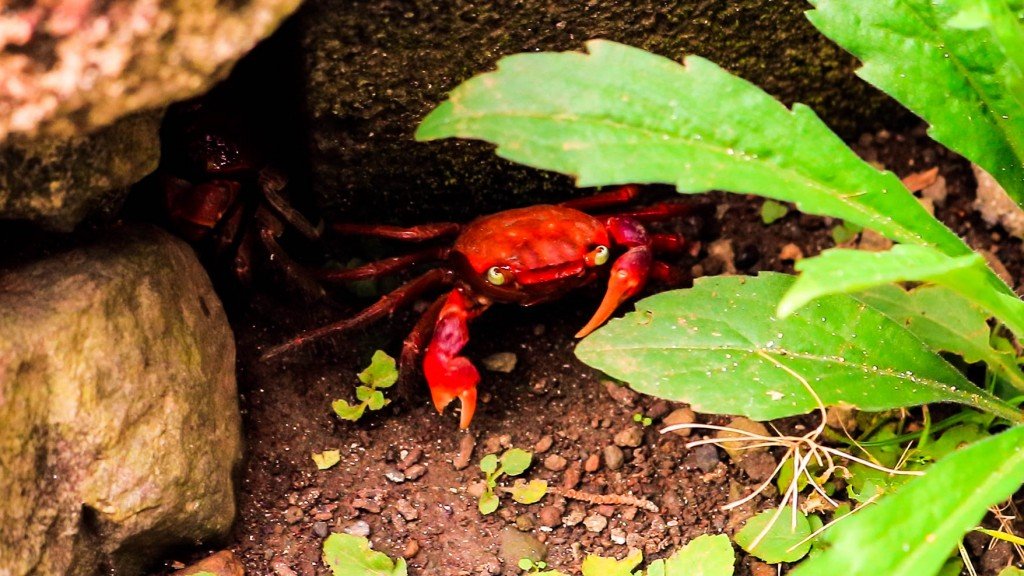 And it is the same with the boars. They are more afraid of you and won’t come near you. Best is to take a flashlight with you since it gets dark very early, even in summer. That’s why it is good to have any kind of light with you, because the path back to the Retreat Wabi-Sabi can be a bit difficult to find when you are walking around in the dark.

GOOOOD FOOD
It’s a small walk to the next convenience store to grab some food and I highly recommend to check out the pubs and restaurants in the area. Specially Japan has its well-known regions for different kinds of food and specialities.

For example Okonomiyaki. It is a sort of cabbage pancake filled with fish, chicken, beef, pork or just vegetables. But depending on the city the recipe changes. In Kyoto, I had some street food while exploring the streets of Gion and the Fushimi Inari Shrine. One of it was Okonomiyaki and next to the cabbage they had noodles in it and shrimp. I just loved it so much that I actually wanted to have another one, but I eventually would have exploded, so I didn’t do it.

That’s why you should check out the local food. It tastes fresh, healthy and makes you all around happy. I swear! 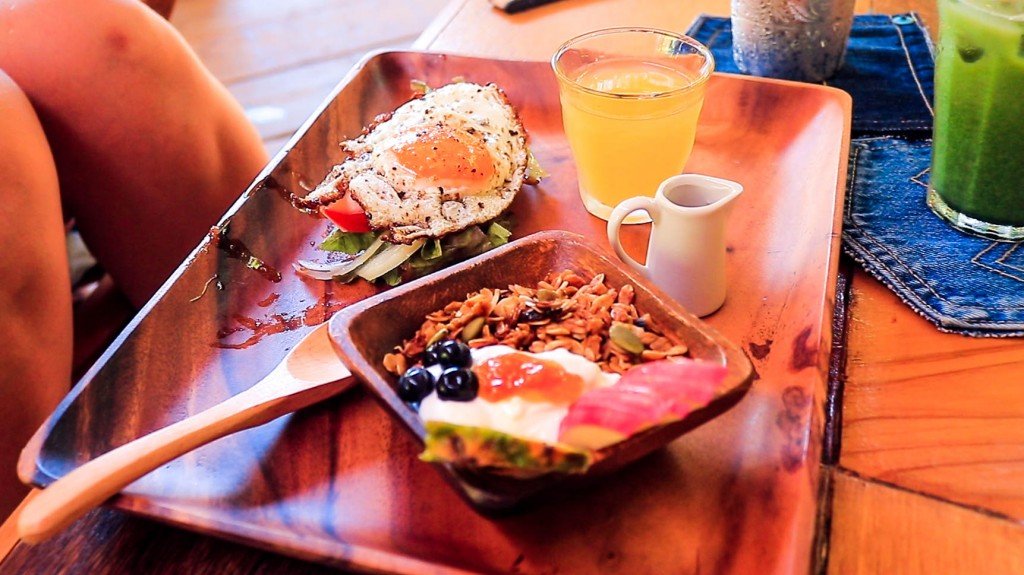 It was the same while we ate at the Retreat Wabi-Sabi. Some sentences earlier there was the hint of food which is seasonal, organic, herbs and fruits out of the garden. And it was the truth. Just take a look at the breakfast and lunch they provide for you. It is so tasty and just makes me smile every single time I take a look at these fond memories. 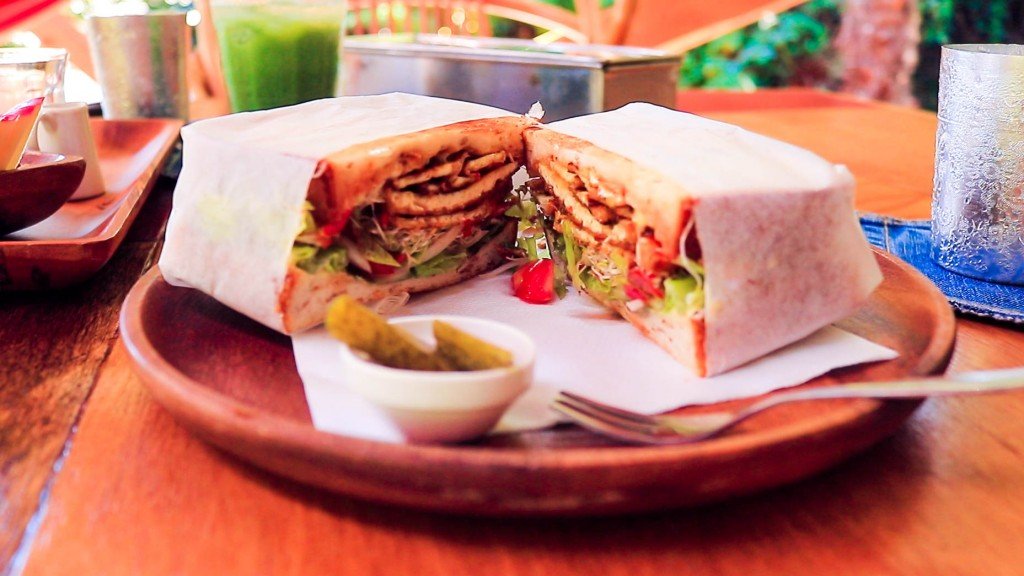 For dinner, they had two different dishes. It was a more regular Japanese meal with vegetables, meat and noodles. The other one was vegan Indian curry. And it was so good that I ordered it the following evening again. It was slightly different, because sometimes the ingredients were out of stock and added therefore other vegetables.

FAMOUS NEKO CHAN
Neko Chan basically means “little cat”. Neko is Japanese and is the regular word for cat. The ending Chan, same as Kun is a title like Mr. or Ms., but only for girls and boys or close friends. The cat’s life was a hard one in the beginning. He was neglected by his family while he was too young to hunt for himself and became a stray. Wandering around through the streets, skinny as he was, the fur sticky and smelly, the owners Angela and Yasu of Retreat Wabi-Sabi found Neko Chan and decided to take care of him until they knew he is old enough to survive on his own. Some time passed, and they fell in love with him. Instead of giving him away to a nice and warm family, they decided to keep him, because they knew Neko Chan would never ever leave them again and would always return to this little space of heaven on earth in the middle of nowhere.

And since then he loves to show up whenever he smells food. Tuna paste is Neko Chan’s favourite and Angela gave us a little treat for him. He could not stop purring and had some trouble while he tried to lick the sauce out of the package. 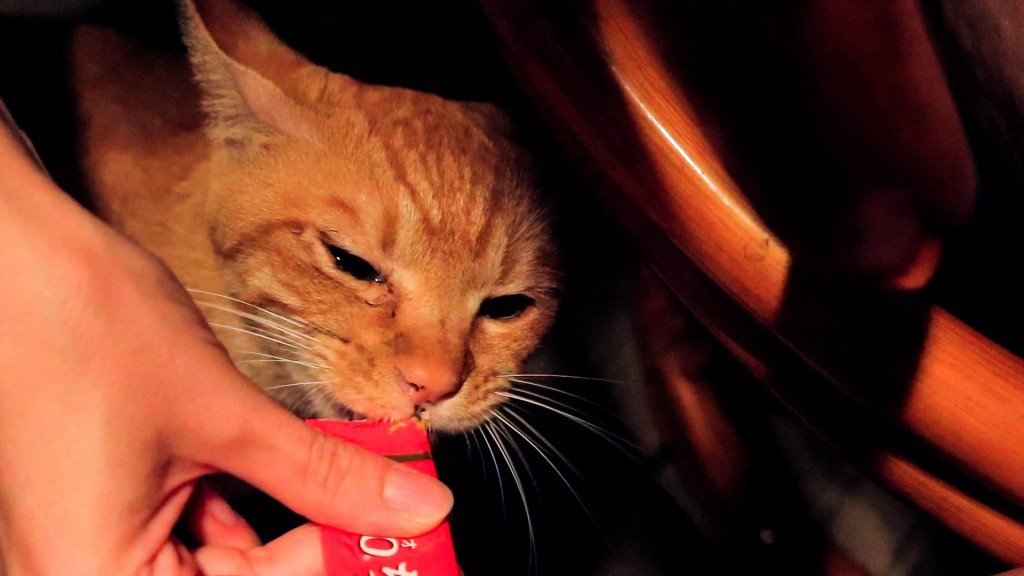 That's all for today. Enjoy the summer and get a smoothie or ice-cream!

HERE IS THE LINK OF A VIDEO THAT I MADE OF KISAMI OHAMA BEACH!