In my previous blogpost I wrote about the day I spent in Nagoya for work.
I wrote mostly about how the work day went, but today I wanna talk a bit more about the city of Nagoya itself.

Nagoya is relatively close from Tokyo, only 1-2 hours via Shinkansen (and even closer to Osaka and Kyoto), but is often regarded as a lesser destination compared to the other three. However, it actually has many unique charms and tourist attractions of it's own. In particular, that Nagoya is "less updated" than Tokyo or Osaka is interesting, because some parts of the city still feel like it is in the late 90s or early 2000s. It gives Nagoya its own "pace" and lends it a lot of character.

Nagoya Station its adjoining adjoining malls are decidedly modern and "normal" in architecture, but once you step outside the buildings are a lot less updated than their Tokyo counterparts. This is not a huge change, but subtle differences in the shapes of the buildings and use of more old-fashioned finishes are enough to change the entire ambience of the city.  There is a slight industrial vibe to the city, which I later realized was right on the money because Nagoya was and still remains a major industrial and transport manufacturing hub of Japan. The largest industry here is the automotive, aircraft and electrical component manufacturing, and every industry giant has a plant in the city. 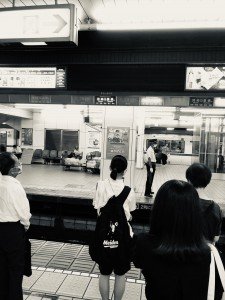 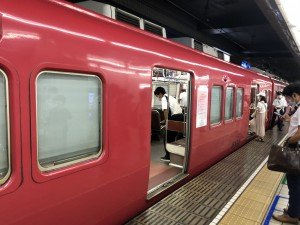 The old-fashioned, laid-back pace is also reflected in its food, which is a lot less fussy and a lot more in-your-face, as long as it is delicious. Nagoya's biggest eats are the Miso-Katsu, the Tebasaki and Miso NIkomi Udon.

I had the Miso-katsu for lunch when I reached Nagoya. As its name suggests, Miso-katsu is simply a huge Katsudon, slathered evenly (without missing a spot) with rich salty aka-miso before serving. So whereas in Tokyo, Tonkatsu is usually served seperate from the sauce which one is free to heap as you like onto the meat, here you get a even coat of aka-miso with every bite. It's delicious and well balanced. Actually I find that I like the miso with tonkatsu more than the standard tonkatsu sauce you find in Tokyo, slathered or not. I had this at a no-frills store in the standard food alley of the Nagoya station, but there are many more establishments that each claim to have the most authentic and delicious Miso-katsu in town. I leave that to you. 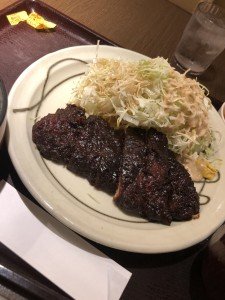 Tebasaki are deep-fried spicy chicken wings and the snack of choice for Nagoya people after work. As you can probably tell, it goes perfect with beer, which I wish I had on this extremely hot summer day. Miso Nikomi Udon is again simple Udon in soup, but instead of a light dashi broth you get a thicky bubbling pot of Miso gravy (not soup, its thicker and I don't think you can really finish it the gravy because it is that salty). As you can see, simple, not-very refined but big on flavour and guaranteed to satisfy. Gotta drink lots of water though, honestly they are a tad salty.