This week is what is colloquially known as Silver week in Japan. The lesser known sibling of the famous Golden week in May, it is a 4 day holiday from last Saturday and ending today, Tuesday.

Respect for the Aged Day (September 21),
One of the most meaningful public holidays, this national holiday is a yearly reminder for all people to take good care of their elderly parents and relatives. Especially relevant considering Japan has the lowest birth rates and some of the longest life expectancies in the world.

This holiday officially marks the change of the season to autumn, which is weirdly accurate because I really felt that summer was ending the last week, and woke up to a particularly cold morning today. Its Autumn people!

In any case, I took the chance last Sunday to head out and visit Yokohama, the beautiful port city south of Tokyo and Kawasaki. Yokohama is an hour out from Tokyo by the Tokyu Toyoko Line, and everyone who's heard of Tokyo would also know that it is a top choice for a day out of the Capital.

This time, I'm going around with a friend, Rei, who actually is from Hokkaido (!) but is in Kanto for work. We arranged to have lunch and then visit the Yokohama Museum of Art, which was hosting it's flagship event the Yokohama Triennale.

Per Rei's recommendation, we had lunch at Rigeletto Ocean Club, which had a lunch set going for ¥1600. The lunch was great, but I might be biased because its been a long time since I had anything fancy. I've been on scrimp and save mode for a while now, besides the bi-monthly trip to the Yakiniku restaurants. So excuse me while I over-react to a nice delicious plate of salad hors d'oeuvre and seafood paella. The set then finished with a small serving of pumpkin pudding and drink of your choice. 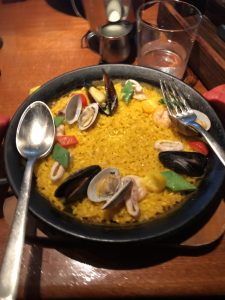 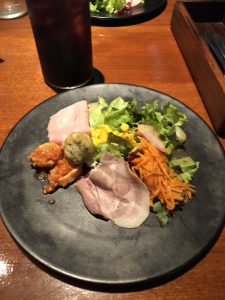 We walked to the Museum of Art next, and this is where Yokohama hits really differently from Tokyo. Firstly, everywhere you go you immediately feel the sea breeze in your face. Even when we were relatively far from the bay and surrounding by tall buildings, it was still rather windy and comfortable. It helps immensely, of course, that the whole area was meticulously planned back in the 1960s(!) especially to avoid the cramp that plagues Tokyo today. 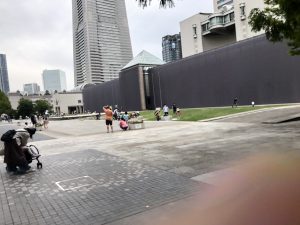 It certainly is working, dear city planners. Your work is genius and appreciated greatly.

A comfortable 20 minutes later, we were greeting by the monumental Yokohama Museum of Art building. To be honest, I wasn't particularly impressed by the exterior of the Museum, but the area of around it was certainly, again, well planned. Across the plaza facing the museum is immediately a family friendly mall, whereas a pedestrian bridge across a bustling road leads straight to the Landmark tower and its iconic sculpture.