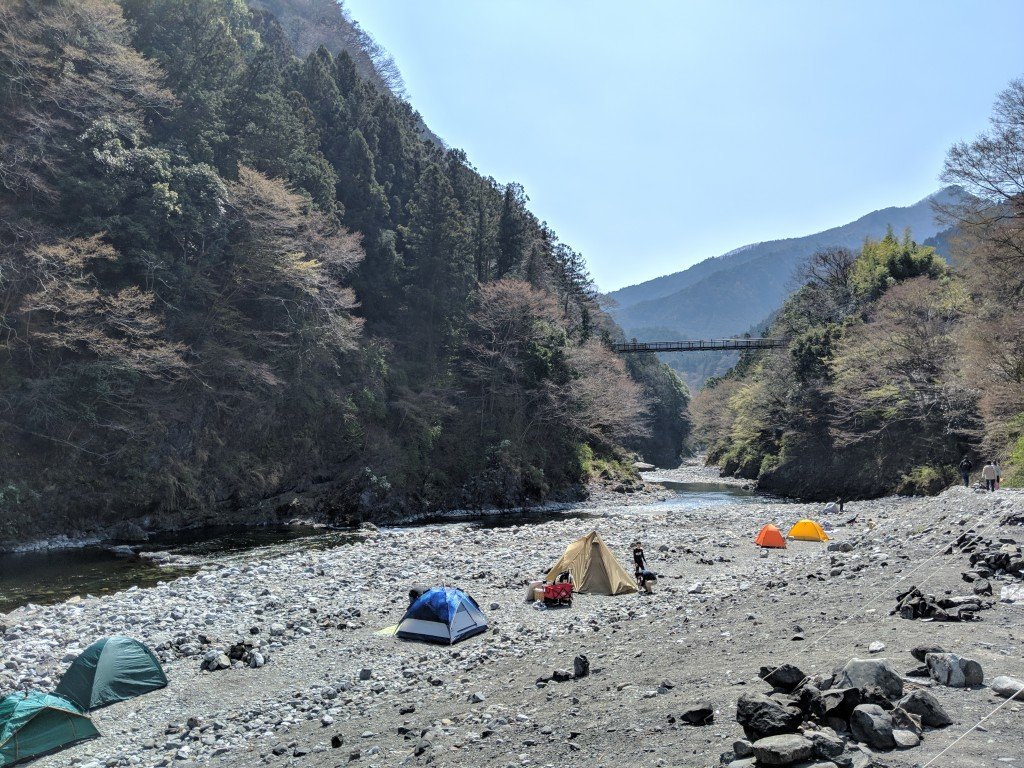 April and May in Tokyo can be a perfect month for the first camping of the year. It gets much warmer than March less crowded than in summer. I like brewing and drinking a coffee at a camping site but I must say coffee tastes better in April or May when it's cold at night. It is also the time of the ear that you appreciate the warmth of a campfire. Nothing is more relaxing than surround fire at night with a cup of warm coffee, maybe with a bunch of friends.
That's exactly what I did with friends in Oakhouse Kichijoji 2 on a day in April.

The easiest camping site in Tokyo

Hikawa campsite is a campsite in Okutama where you get to do the easiest and the laziest camping in Tokyo. Located within 10 minutes walk from Okutama station, this is the camping site where you don't need to bring basically anything. The campsite is right on the riverside where the river bed is big enough to host more than 50 tents. You do need to bring your own tents if you want to stay on the riverside but you have a choice to stay in a bungalow if you book in advance.
For staying with a tent you only need 800 yen per night which is a very good deal. you can probably swim in the river in summer. The water is crystal clear as you can see the photo below. 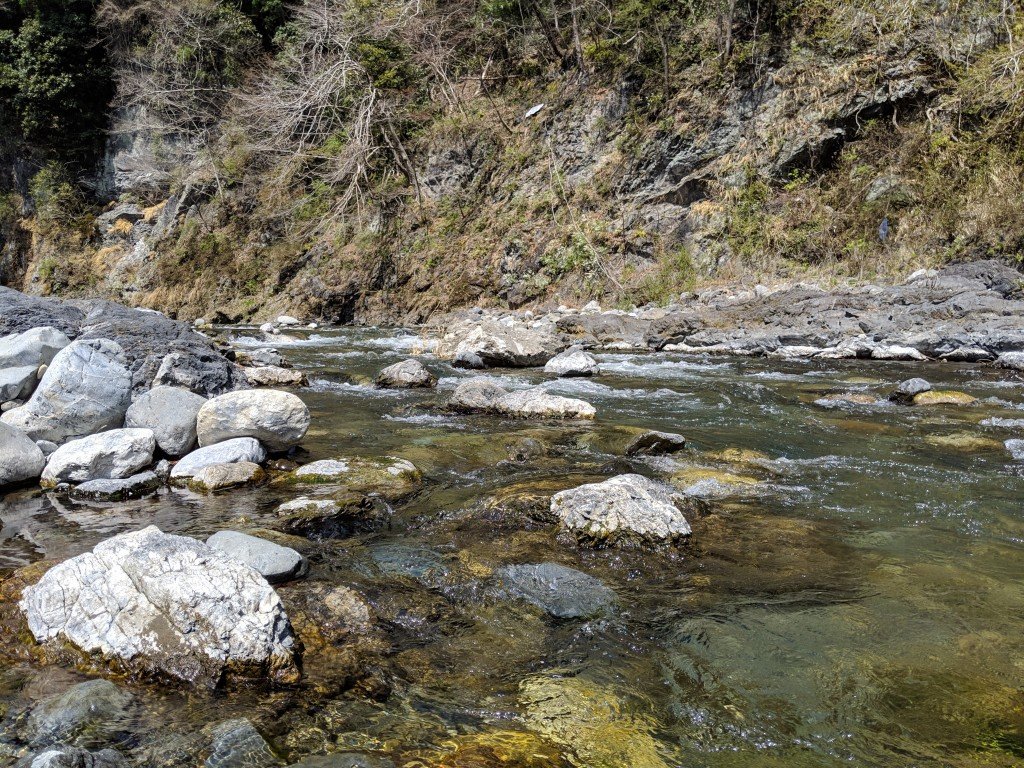 The riverbed is kind of rocky so you do want a thick mattress for quality sleep. If it's an April you probably want a thick blanket or a sleeping bag to make sure you don't get cold at night. 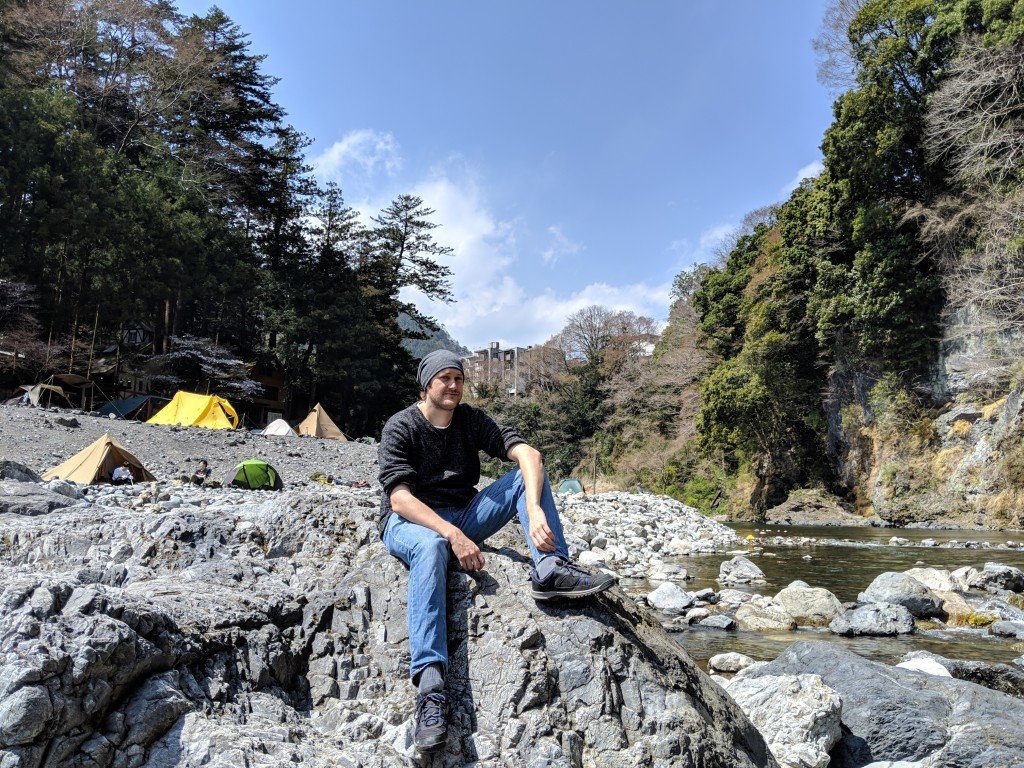 There there are some cooking sites available at the camping site where you can rent the cooking tools for a couple of hundred yen. We rented an iron grill and some firewood for a campfire at night.
There there are a couple of grocery shops in front of the station where you can buy all the food for camping. This is great because we don't have to bring all the food and drinks. We can basically get everything close to the camping site.

A bunch of firewoods is available for 500 yen the and that's enough to keep the fire running for long hours.

Not many camping sites in Japan allow campfire

We finished eating before sunset and cleaned things up so that we can keep on drinking without losing anything in the darkness.

Actually, most camping sites in Japan do not allow campfire on the ground directly. It is to protect the ground because the ground usually gets charred after a campfire.
There were some charred spots at the Hikawa campsite as well but it seemed to be okay to do that at this can being sites. I guess it's because the water is right beside you and the riverbed is so big that you don't have to worry about burning the forest by accident.
the campfire was something that I wanted to do the most on this camping trip. it's somehow so relaxing to just look at the fire. I guess our brain is wired to feel that way from the Stone Age. 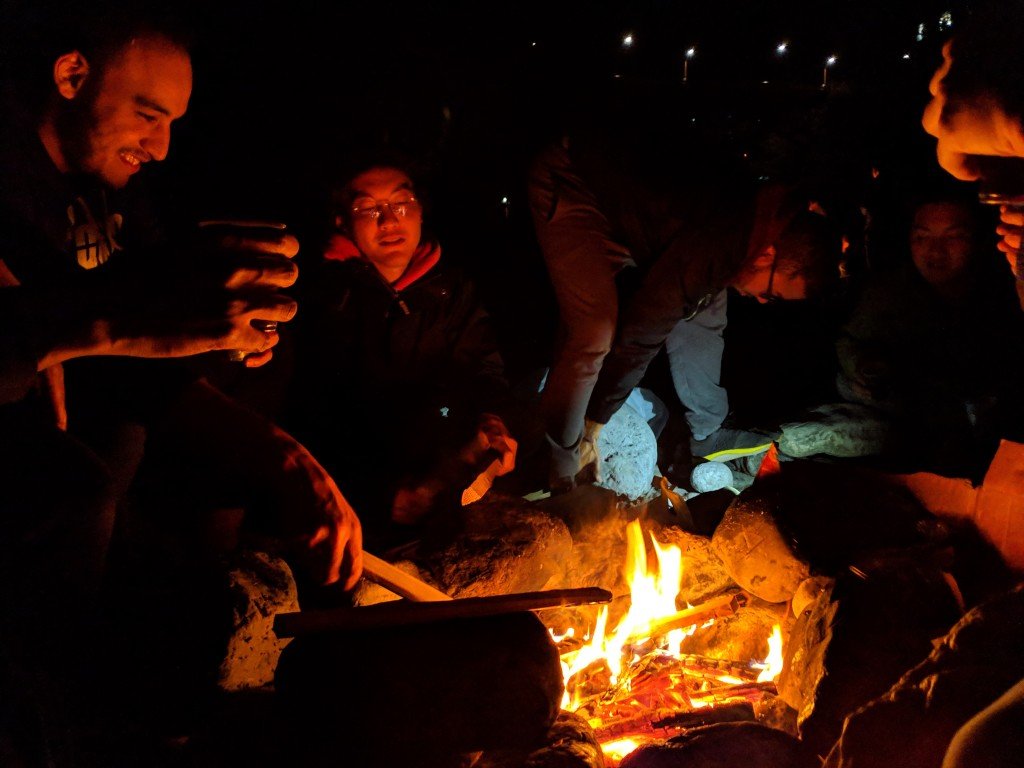 The night was still young at around 9 p.m. when we almost finished burning all the firewoods and almost no drinks left. It was not a problem because we were already tired and sleepy. I bet no one sleeps this early usually though.
We looked around our fire in the darkness and noticed that we're not the only one who's doing a campfire. 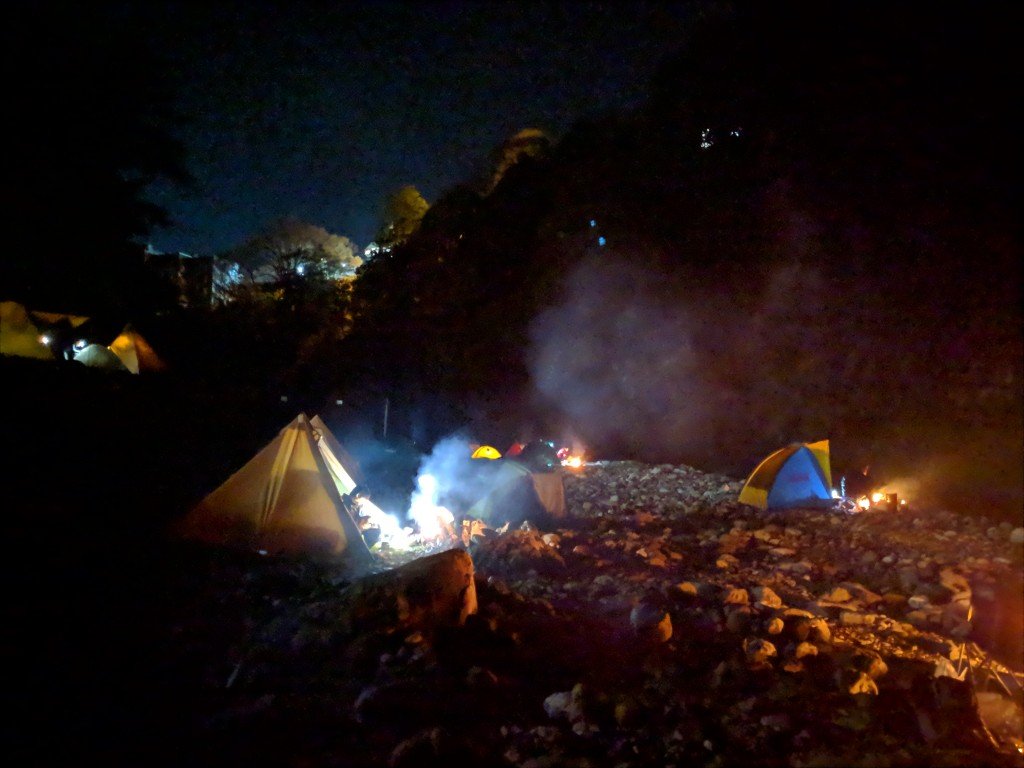 We were a group of nine but no one really brought fancy outdoor gadgets. What we brought was tents, mattresses and sleeping bags. That's really all you need for minimalistic camping as we did.
If you're looking for an easy weekend camping trip that you can access from Tokyo, Hikawa campsite is definitely recommended.