This Sunday 02/10, we held our first Pilates class at Oakhouse Kyoto Kawaramachi.

Four people decided to join. Some of them knew what Pilates is and some of them had no idea. But despite one's level, everyone tried to do its best! That's why I love this job! As a teacher, you get to see the "students" trying so hard, doing more than what they think they could do, and feeling good at the end of the class. 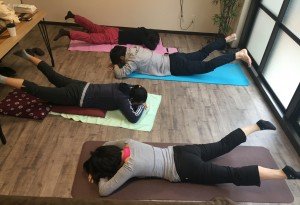 For the little history of Pilates and its founder...
Pilates was created by a German man called Joseph Pilates in the beginning of the 20th century. As a child he suffered from rickets, rheumatic fever and asthma. So he dedicated his life to improving his health and strength. He learned and was influenced by gymnastics, body building, yoga and Martial Arts, and the natural movements of animals.
In 1912 Joe went to England, where he worked as a self-defense instructor for detectives at Scotland Yard. However during WWI, he was interned in a prison camp in England. During his internment, Joseph Pilates refined his ideas and trained other internees in his system of exercise. And Pilates legend has it that during the great flu epidemic of 1918, not a single soldier under his care died.
After the war, he returned to Germany and collaborated with experts in dance and physical exercise. But as the political situation became bad, he diced to immigrate to the United States in 1926. With his wife, that he met during his journey, they opened a studio in New York. It soon became very popular, particularly with the dance community, and many celebrities of the day visited his studio.
Till his dead, at the age of 83, Joseph Pilates was teaching with his flamboyant personality!

Pilates technique has so many benefits and its always a pleasure to share that with people and see the transformation it creates!

As today was the first class at Oakhouse Kyoto Kawaramachi, the focus was on learning the basics: learning how the breath (the most important!), learning to feel specific muscles, learning to articulate the spine, learning to coordinate the breathing with movements.

After 1 hour class, all the participants were more flexible, could hold a better posture and felt more relaxed. The smile on their face was a good sign they had a great time!

See you next week for a new class! And let's continue this journey together, to improve our health, body mind and spirit! 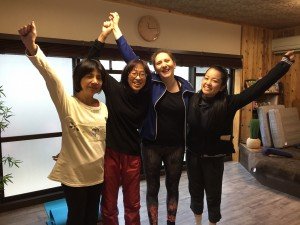 My name is Vanessa. I'm from Belgium.
and currently living in Kyoto where I'm planning to open a new Yoga/Pilates Studio.

I've been a Pilates teacher for 15 years. And I also studied Shiatsu Massage.
I love to share my passion and experience and I love to learn from others, meet people and laugh!

If you have questions about Pilates, Shiatsu or the course, send me an email: vluckx@yahoo.fr