See you Eric-An no Nippon

Since one of our best friends, Eric is going back to the United States, we had a movie night as our last memory.

We watched a movie based upon crazy guy, Mesime.

Mesime repeatedly escaped from prison and made international headlines during a final period as a fugitive when his exploits included trying to kidnap the judge who had previously sentenced. Actually he has such a talent. As a particular note is that he always had glamorous female companion. He has been living in such anti-social life all all of his life, but at the same time that was really fascinating life as well. 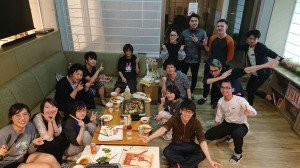