It's June 2020, and the the world has been dealing with the Coronavirus Pandemic for half a year. Feels more like a full year.

In Japan, the state of emergency was cancelled relatively quickly back in 25th May. Since then, an expected explosion of cases has yet to occur... leaving Japanese and foreign experts confused. I am similarly skeptical, to be honest, although obviously thankful that the situation here is relatively ok.

Many attribute this to the Japanese people's cultural reverence towards authority, and generally the nation has heed the calls to stay inside and not go out. During the golden week holidays in early May, the annual explosion of inter-prefectural holiday did not happen, and Shinkansen and plane ridership fell by almost 95%. Even as the situation in Japan seems to be getting better, many are still being cautious, and working from home is still prevalent.

My firm began working from home in early April, and we are still doing so.

So far two months in, let me share my thoughts :

So for my firm in particular, we work from 10am-8pm. Overtime is not uncommon, but usually we can end on time. Usually, this would mean I have to wake at 8am to prepare, then I have an hour's commute by cycling to work. Now, I can wake at 930 instead, giving me 1.5 hrs more of shut eye.

Where I work, we usually go out for lunch together, and obviously now I'm just staying at home and having my bento or buying something from Sukiya or 7-11. It's actually a lot cheaper, since most restaurants outside have a price range of 700yen -1000yen, whereas a 7-11 packet lunch can be as cheap as 350yen 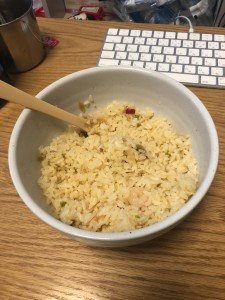 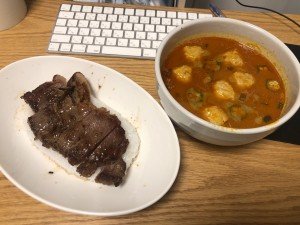 Meals at the work desk. Most of the time its simple (Left). Occasionally I treat myself. (Right)

The end of the day however, does not see the same sort of time saving as in the morning. Of course, I also save the bicycle ride; but for some reason, we seem to end even later now. Perhaps it is because of a subconscious understanding that we have saved time, perhaps it is because we no longer have a 'need' to leave a physical premise and perhaps it is because work is a less efficient than before, but we are working till much later, say about 10-11pm. In the end, the time we save from the lack of commute is put into work...

I'm sure that for some firms, such an situation does not exist and people just end work on the dot, but it does feel from talking with others than it is not unique to just my firm or even my industry.

Not too bad, in part because the room isn't too small at 11m2, and because we have a common area. I wrote before that I was glad I chose a bigger room ahead of the pandemic, and this is still true. Looking around, my room has become a tad messier, but not by much, and I think having adequate space to move around is vital to feeling fine in these times.

Since the pandemic, there are more people in the house because more people work from home, but we are working, so mostly I still stick in my room. It's also nice to still see faces and be able to talk, but also in part because we also want prevent the spread of coronavirus (in case), we also try to stagger and not crowd the common room.

Another thing that helps is my starting to grow basil and tomato. It gives me a bit of a reprieve and something to do in the open air balcony. Still actually haven't gotten any produce out of it, but I'm having fun so far. 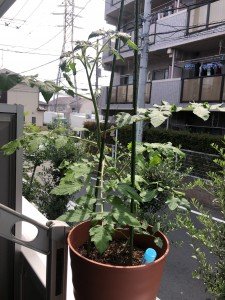 Having a a little place to relax is really helpful. Its a big deal to me at least.

Those are really the two main thoughts/issues/reflections I have since April in general.
We are not scheduled to return to the office, although my boss has told us that he has started thinking about it, or at least some sort of shift arrangement. Regardless, we should still be working from home till mid-July.