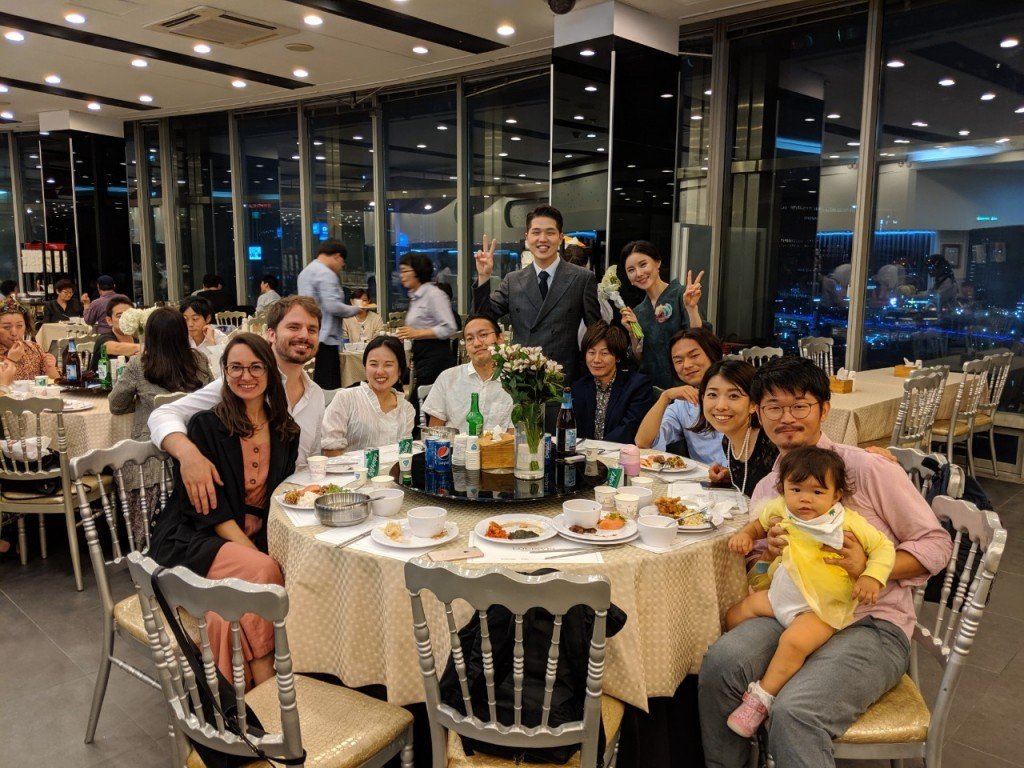 In September 2019, I made a trip to South Korea with a group of friends that I spend my time while I was in Oakhouse Kichijoji 2. Two of our Korean friends got married and invited us to attend their wedding in Seoul. I have been invited to friends’ wedding before but never outside Japan. It took me two seconds to answer his (groom’s) invitation without even asking my wife. I knew she wants to come with me and I was right.
Immediately after, I started asking our mutual friends if they are interested in coming to Seoul with us. Some of them could not make it unfortunately but the number of travelers grew and we were a group of 7 by the time we booked the flight. Five of us from Japan and two more from London. This was the very first time that I met ex-housemates outside the country. This is gonna be so much fun.

Our trip started with heading to the Airbnb apartment that my friends booked for everyone. The apartment is located in such nice area and the rooms were absolutely beautiful. I can easily say this is the best Airbnb I’ve ever stayed in my life. Let me show you some of the photos from Airbnb listings and the house room is as nice as these nice photos.

There are 3 stories with 3 bedrooms, 1.5 bathroom in the house and up to 6 people can stay at once. I loved every inch of this house but my favorite was definitely the rooftop. For some reasons, it’s somewhat rare to find rooftops in Japan but it seems to be pretty common in Korea. I looked at other houses from the rooftop of this house and I can easily find other houses with nice rooftops. This is clearly something missing in Japan. If I ever build a house, it’s going to look a lot like this.

We took a taxi from Gimpo airport to the apartment. It was smooth and didn’t take no more than 30 mins. We were actually worried about the flight as ANA told us that there’s a chance that the plane has to go back to Haneda because of the typhoon. It was lucky that we made it to Gimpo but we could tell the wind was still strong outside. When we reached the apartment, it started raining. It was hard to spot the right house because Google map did not seem to be working well in the area. I heard from a local Korean guy later that the Korean government is not sharing a good map of Korea due to the national security reasons and that is why Google map is using a lousy map. We found a building, checked in, and we had about 4-5 hours to kill before we head out for the wedding. We went out for lunch. Luckily there were so many places to eat around the area. We found a noodle place and spent some time there.

We, then, started walking around just to get to know the area. There were many cafe, restaurants around but many of them were closed because of the typhoon. I heard it’s actually rare that typhoon comes all the way to Seoul. We still found a very nice cafe that serves high quality specialty coffee. Spent some time there and headed back to the apartment. 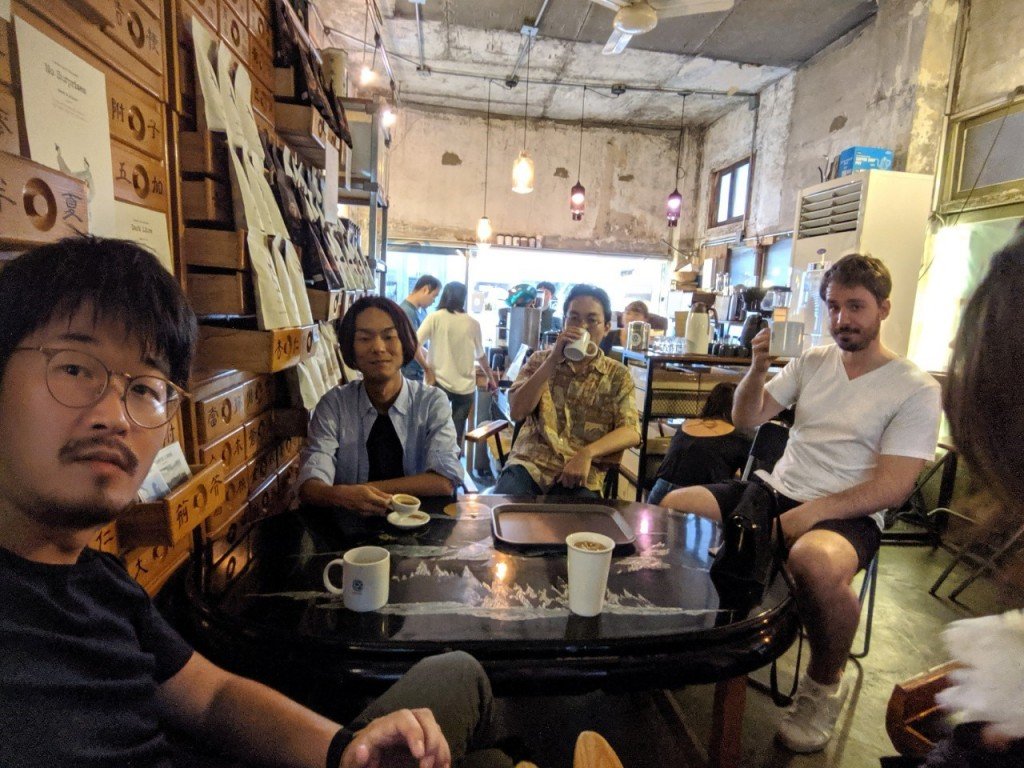 We took another taxi to the wedding venue which was not too far but we needed two cars. We were kind of late when we arrived but the entire process was simple to actually get in the venue.

There was a reception in front of the wedding hall but some people seemed to be going without talking to the receptionist as if the wedding is open for everyone to attend. I heard about how open the wedding is in Korea. This must have been it. 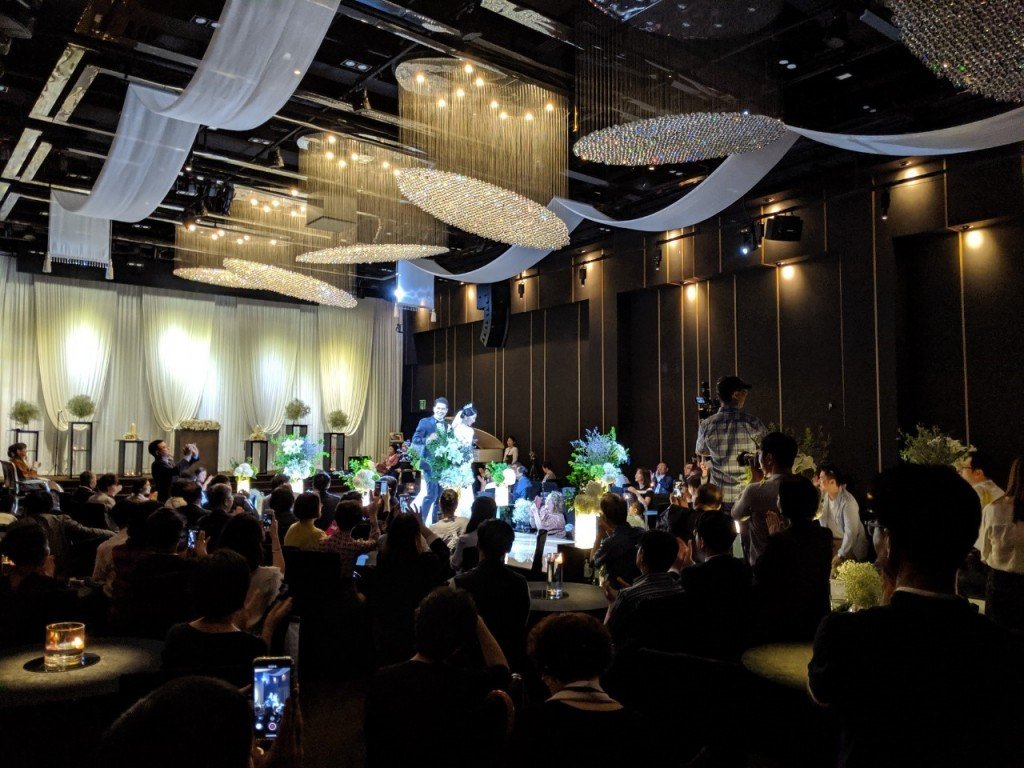 The wedding ceremony was nice. It was kind of similar to what I see in Japan. I noticed some attendees were wearing casual, daily clothes and this was interesting. I heard it is okay in Korea to come with friends who don’t even know the bride and groom. There usually is a buffet style dinner after the ceremony and all the attendees just spend some good time with relatives and friends. I was actually surprised how casual the entire thing is. I obviously like the Korean style better. There are just way too many rules and procedures to follow in a Japanese wedding and just way too official. My wife and I did not hold a wedding because the entire process seemed too troublesome. Maybe I could’ve done a wedding like this.

After the ceremony, the bride and groom invited us to something more traditional. I am still not sure the purpose of this ceremony but it should be the traditional style of the wedding in Korea. Everything happened in a smaller room where only relatives and close friends are invited. It seemed like there were series of manners and procedures to follow. Certain place to sit and certain timing to bow, that sort of things. Still it did not seem too agonizingly formal like most ceremonies in Japan. We were lucky to be invited to this ceremony to see the traditional costume and everything. This was the most exotic experience of the trip.

We were also lucky to reunion with one of our Korean friends in the ceremony. We actually did not know that she is coming to the wedding because of her work schedules and everything. She was working as an architect in Beijing for a while and she happened to be in Seoul on the wedding day. After the ceremony and dinner, we headed back to our Airbnb house and she joined us for our house party later.
We came back to the house and started our party soon after. The rooftop of the house had a great view at night. The temperature was just right and comfortable too. Drinking beers and talking about stupid stuff. It almost felt the same when all of us were in Oakhouse Kichijoji 2 back in good old days except that it’s different this time. We are in Seoul! It’s amazing to think that we’re reunited like this years later outside the country we originally met.

We spent hours and hours… drinking and talking until everyone got sleepy but there were just too many things to catch up. I guess two years was a long time.
By the way, this is just DAY 1. Let me write about the rest of the trip on my next post.