Raphael first fell in love with Japan 11 years ago, and now he's back on a working holiday visa. He has a lot of experience, so we asked him what he thinks about Japan!

Please introduce yourself.
I'm Raphael, from France, and I'm 30. I've been in Japan 6 months now, and in this share house for about the same.

How did you find this house?
I was staying in a capsule hotel for about a week, and I went online to search and found it pretty quick. I made an application, and moved in the next day. It was so fast and easy.

How exactly did you find it?
I just googled "share house"! I did know I wanted to live in a share house, because they're cheap and there are always people around so I wouldn't be lonely. I looked at other share house companies but Oakhouse had the easiest website to understand, and there were lots of pictures of the house, so I could get a feel for the atmosphere.

This one was cheap, and convenient, and it also helped that the staff spoke English. 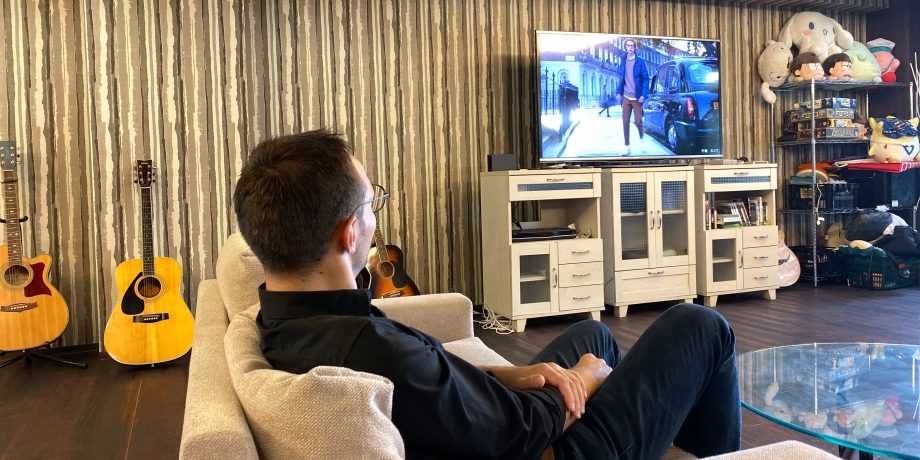 Tell us the good and bad points about living in a share house!

There are lots of good points. It might be difficult if you're a foreigner that can't speak Japanese, but Oakhouse staff has English speakers so that's great. They're really responsive to house viewings, and it only takes about an hour to do the whole contract process.

At Oakhouse you pay by month, and gas, electricity, and water are included, and internet is free. I signed a short-term contract at first, but I loved it so much I did a longer one. And the contracting process after that is so easy because it's all online so you don't have to deal with extra paperwork. The best thing about the share house is that you can meet people from all over the world. About half the residents here are Japanese and the other half are foreigners, from Taiwan, Korea, America, Europe.

You can definitely expect to meet great new people.

Everyone is so friendly, kind, and positive.

It sounds like you like the house!
I love it! I was actually supposed to move out a week ago but I decided to re-contract. That's how much I like it! 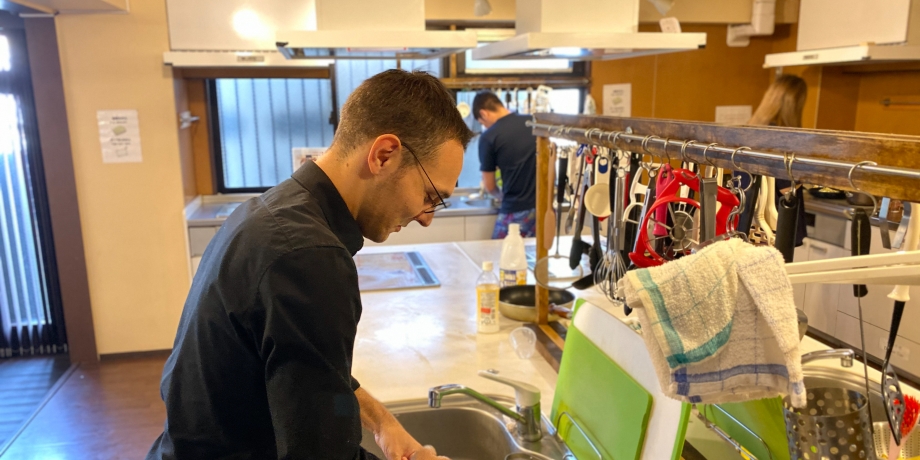 Was it hard to apply for the working holiday visa?

It might be different depending on the country, but for me the working holiday application was easy. If you apply, you get it. You have to answer some questions and have money saved up, and the questions are about your travel and work plans. You have to show that you won't just work the whole time, and also take time to travel.

You also have to show that you've done some research into Japan. Like, reading about the culture, the work culture, have you looked for jobs already, that sort of thing. Basically you just have to show that you're not going to be a burden on Japanese society. So for me, I got it really quickly. From application to approval took maybe about 15 minutes!

Was there an interview?
I didn't have one, but there may be for other nationalities and destinations.

In France everything was by documents. Turn in a plan, answer questions, have insurance, show your resume, sign a pledge, why do you want to go to Japan, et cetera.

How long did it take to get all the documents together?
If you're on top of it you can get everything together in about a month. And for your bank, you just go and ask them to give you a statement. It's simple!

I don't remember the exact amount they prefer, but basically they want to make sure you save enough to have a return ticket home, just in case.

Everything you need is listed on the Japanese embassy website. Just follow the checklist. I don't think I've heard of anyone who was denied. 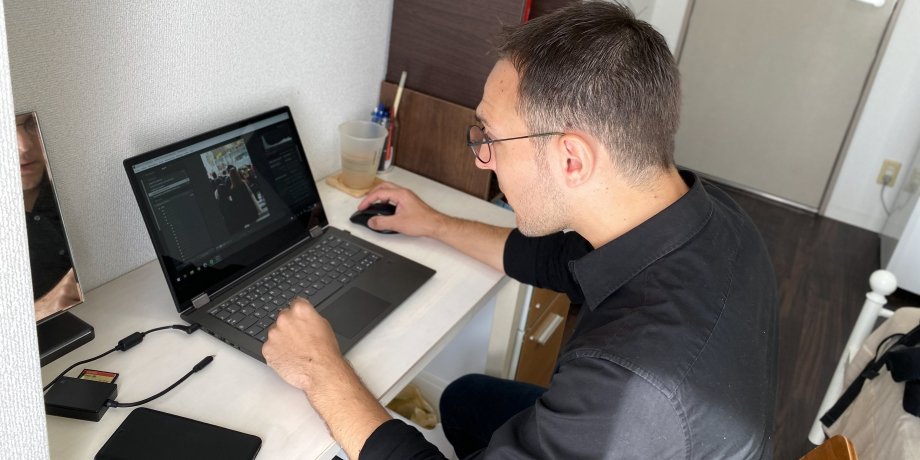 Is this your first time in Japan?

I actually studied abroad in Japan 11 years ago. It was so fun. Then I've come back about 5 other times on vacation. That's why I wanted to come back and do a working holiday. That way I could travel, and also make some money. I love the culture, the food...

What's your favorite Japanese food?
I can't decide, they're all great! I love food. If pressed, I guess I'd have to say Hiroshima-style Okonomiyaki. It's a mix of yakisoba and okonomiyaki.

Where have you been in Japan?
I went to Osaka twice, and I've been to Kyoto probably 15 times, too many to count. I know it might sound lame, but Kyoto really is a perfect representation of Japan. I'll never forget the smell of the bamboo forest of Arashiyama.

What work are you doing now?

I'm a bit limited in what I can do on a working holiday visa, but most people who come on working holiday work in hospitality or restaurants. Right now I do about 2 nights a week at a Japanese restaurant, and then I do freelance French conversation lessons.

This is a great hint for people who are thinking about coming to Japan: you can easily find work using your own language. You can meet people at coffee shops, or college student centers, and find students and make money.

I have many kinds of students, from college kids, to retirees, or regular people who are interested in French and France.

How do you like living in Japan?
It's so easy. Maybe I have a stereotype of Japan coming from France, but I always saw Japanese people as so busy, and maybe I've become more busy too. Even just commuting can take hours.

In the mornings I go to Japanese school, and then I head to work, and prepare for my French lessons, because that takes time.

In my free time I like to take photographs, and that takes time. Finding the right spots, walking around, shooting, editing on the computer, that sort of thing. 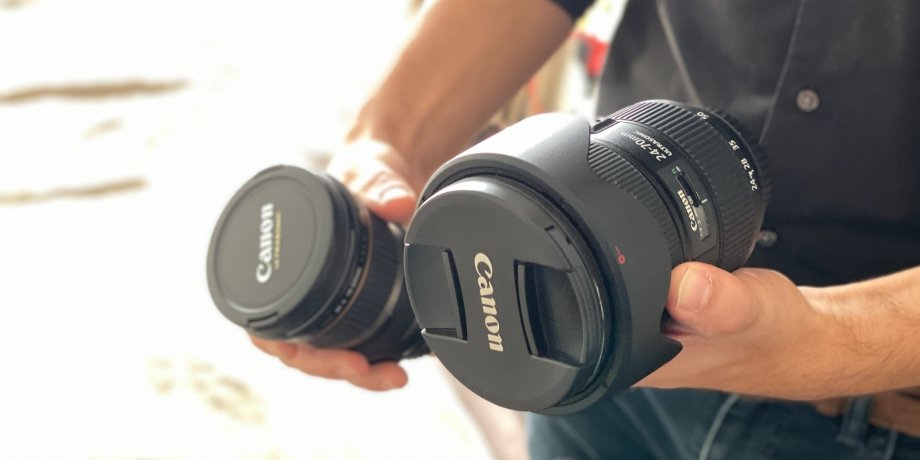 What camera do you use?
I have a DSLR, a Cannon 7D, and 3 lenses. I think it's a good camera, but I don't know what a pro photographer would say!

Taking photos in Japan is great, there is so much inspiration. I think I'm just too used to France. In Japan everything is new, and I find many unexpected things.

What are your plans now?
Right now, it's still up in the air but I have some job interviews lined up.

It has nothing to do with working holiday, though. It's more to do with my career. So if I get the job I'll be able to stay in Japan longer, so I'm really looking forward to that.

Eileen's thoughts
He's such a forward-thinking person! We're excited to see what he does in Japan in the future!