Why I started a business while living in a share house 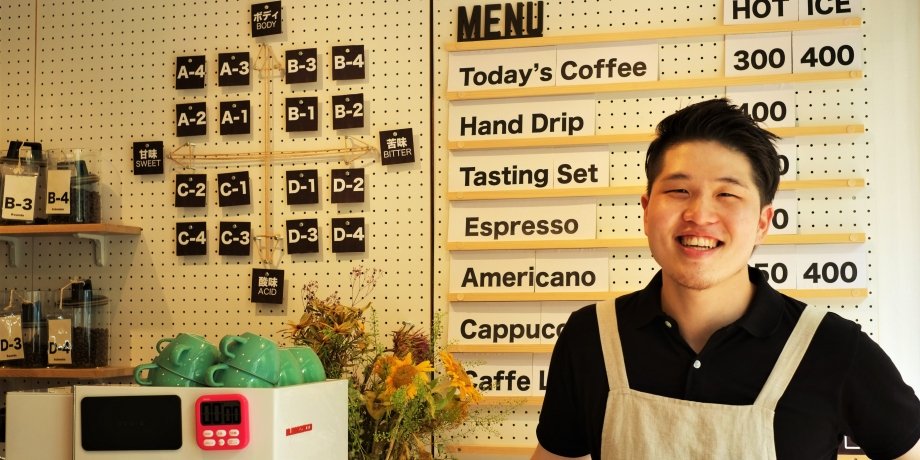 Living in a share house is a lifestyle that has gotten more normal in Japan in recent years. It's not rare for friends and coworkers to live in a share house. In fact, some people even find their marriage partner while living at a share house.

But if you've never lived in a share house before, there's still a lot to find out. What kinds of people live there? What kind of community is it? How does everyone communicate? How much privacy do you have? How does everyone take out the garbage? The questions could be endless.

The location and environment of each share house is of course going to be different, and thus the people living in them will be greatly diverse. That's why in this series we want to highlight the various kinds of unique people living in share houses so they can tell you directly and honestly what it's like to live in one.

In this article, we interviewed Joon Han Yi, who lives in Oakhouse Kichijoji 2. Joon is from South Korea, and 2 and a half years ago came to Japan to work in the Japanese office of Booking.com. After that in November 2017 he started the coffee bean store "Cottea". 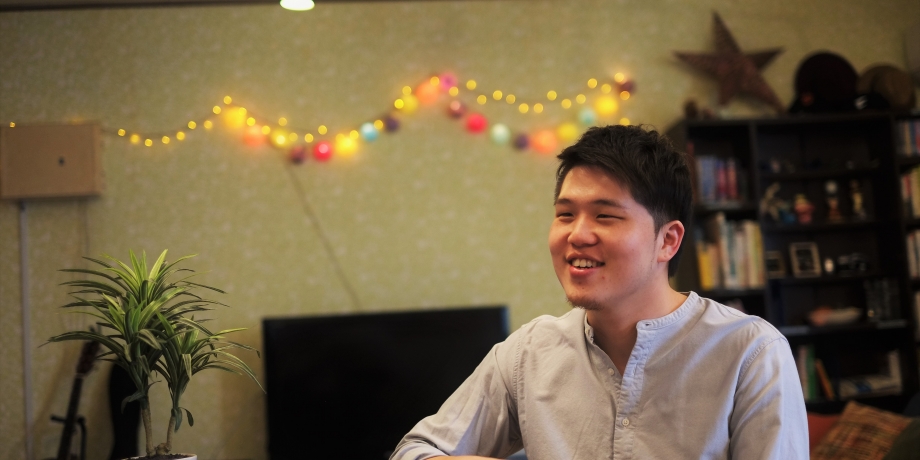 Why did you decide to live in a share house?

I knew about share houses in Korea, so when I came to Japan I wanted to live in one. Then I got a job in a Japanese office, and I looked through different share house companies until I found Oakhouse. There happened to be an opening at Oakhouse Kichijoji 2 so I decided to live there.

When they showed me around the house, I liked the bright mood of the place, and felt like I could make the room my own. I wasn't able to talk to or meet any residents that day but I had a good impression from that moment.

I've been here two and a half years and I didn't plan to stay that long originally. My work at the time was in Osaki, so I thought I'd live here for about a month and keep trying to find another place. But I ended up really getting along with everyone, and I stopped thinking about moving!

How do you interact with everyone?

I see everyone every day, usually in the evening making dinner in the kitchen, which is an easy time to chat, or share food, or cooking tips. Oh and parties too.

What kind of parties?

Some people may think of share house parties as these chic urban get-togethers, but they're super normal. You just hang out at home with everyone. That's what makes it a party, I guess! Like, you can get four or five people together and make gyoza together, and that's a gyoza party. It's really just hanging out together. I really like how natural and down-to-earth it all is.

Cooking together in the kitchen is an easy way to chat 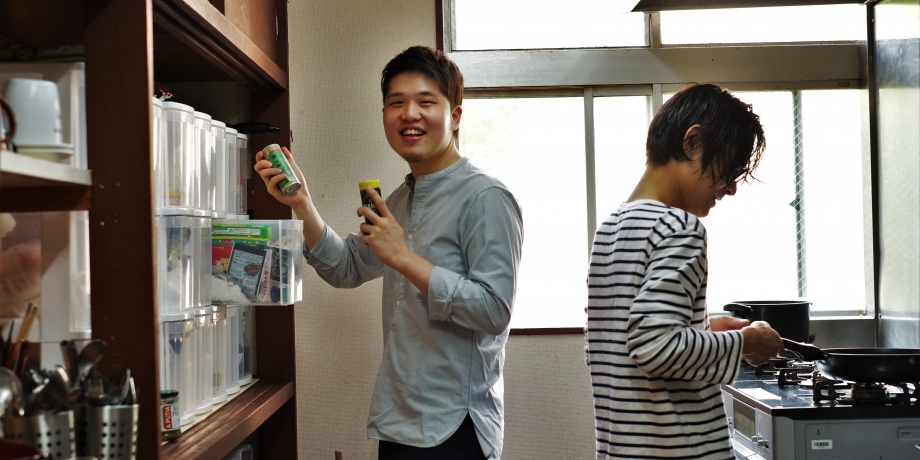 What made you want to start a business?

I've wanted to start a business even before I came to Japan. My dad runs a small business selling Chinese tea in Korea, so I always wanted to do something like that too. Through the help of people I've met in Japan, I was able to start my own company selling coffee beans.

Why did you start the business while living in a share house?

At first I thought about moving once all the company stuff was in order, but as time went on my housemates would always ask me how things were going, or if they could help out in any way. They could help me with ideas, or introduce me to people they knew that could help, so once again, I stopped thinking about moving! 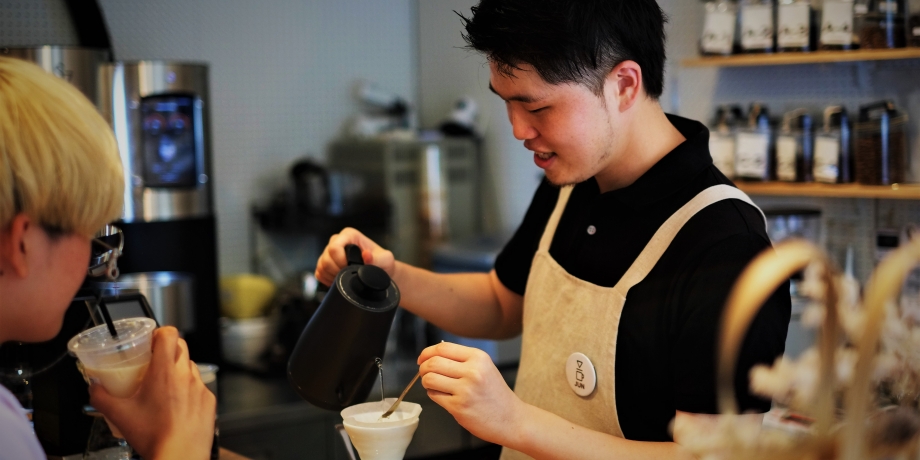 How did your housemates help out?

In the beginning, there was a French woman named Maude living here who was a web designer, and she would always ask if there was anything she could do to help. She was so kind, and a strong designer, so I hired her to make the brand logo and website design. 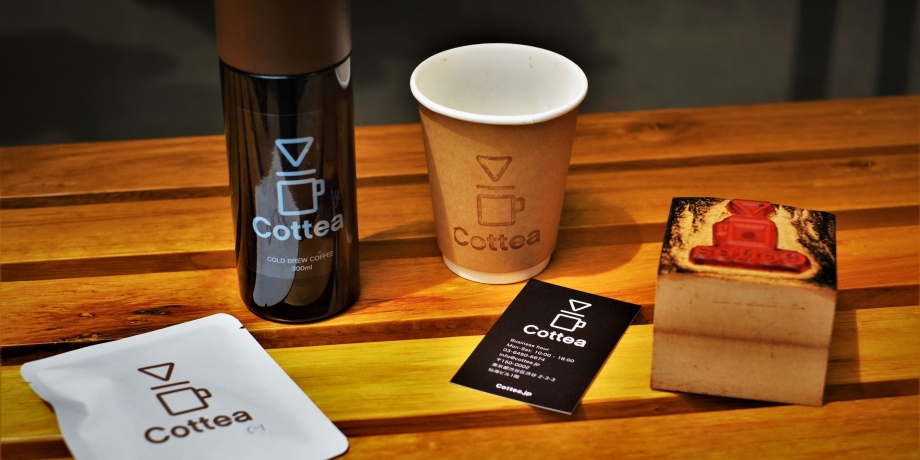 Other than that, there was someone living here who worked at a company that runs crowd-funding, so I was able to gather capital that way. That person is also a web media editor so they were able to assist with web marketing.

There was also a playwright living in the house, so they helped come up with good writing for the brand. There are even staff at the shop that were housemates!

Sounds like everyone had a hand in the business!

It really did feel like that sometimes. There was another thing; I bought an industrial coffee bean roasting machine, but it was going to arrive too early to be put in the shop, which wasn't ready yet, so there was nowhere to put it. One of my housemates said I could store it in their parents' house temporarily! And they were serious about it! There was really no other option so I was really grateful for their help. 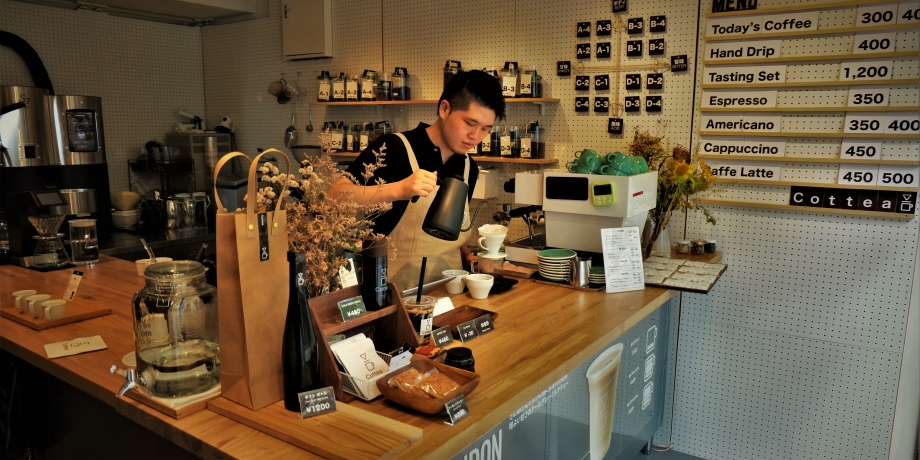 And then after that, that housemates' parents let me use their home office! It was unreal, and so kind of them. I used that office for two and a half months and they were really like my other family. I often go visit them to say hi still.

Yes, I wouldn't have started the business if it hadn't been for the share house!

Going back to the other residents; in your two-plus years here, how many people from around the world have you met?

There are people from all over: France, Egypt, Italy, America, Switzerland, Germany, Singapore, China, Thailand, Lithuania, and probably more. There's a lot of English in the house, so sometimes it doesn't even feel like Japan! It's really expanded my horizons. 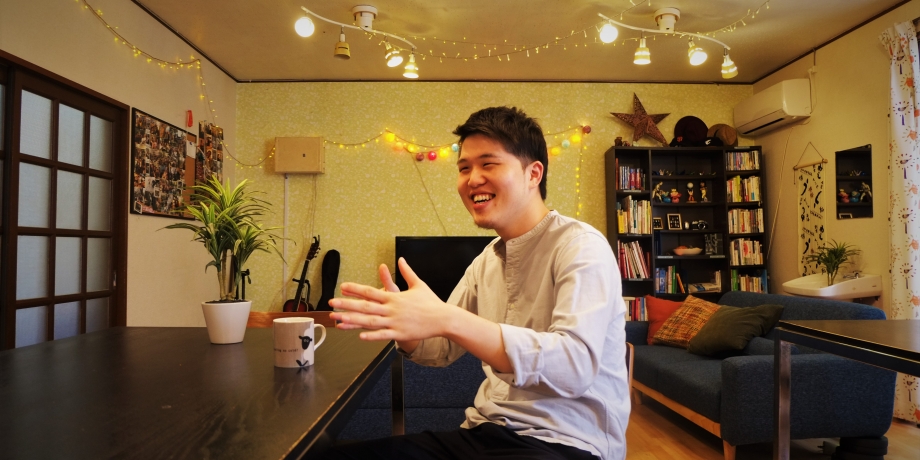 Do you have any advice for anyone thinking about moving to a share house?

Even if you're only a little interested, I recommend just trying a stay even for a short time. It's important to see if the house and its residents are a good fit for you, and you won't know unless you try!